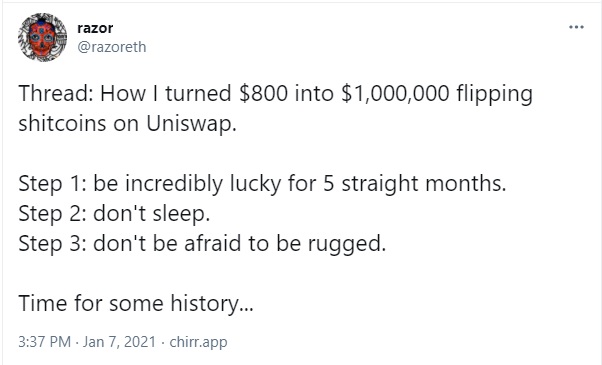 The following is an unrolled Twitter thread by user razor that showed exactly how he managed to turn $800 into more than $1,000,000 by investing in alt coins.

Time for some history…

I learned about Bitcoin in 2011 and bought a few coins. I had no idea what it was or why people were excited about it. I ended up selling for a bit of profit and forgot about it until 2013 when I decided to jump into mining.

I bought 3 mining rigs with 12 video cards and started mining everything from doge to ltc to coinye and every other shitcoin you could imagine. I also made around $10,000 profit mining Maxcoin on AWS with ~100 EC2 instances running concurrently. That was a fun night.

The mining industry crashed a bit in 2014 and I decided to sell all my equipment before the market was flooded with overused video cards. After that I sold all my crypto and used it to pay my bills while I worked on a non-crypto related startup that I ran into the ground.

By the way, I sold everything 2 months before Ethereum’s ICO where one ETH cost $0.31.

I once again forgot about crypto until about March 2017 when I deposited another $2,000 into what would be the absolute beginning of the craziest alt season of all time (until late Q1/early Q2 2021).

I ended up running this $2,000 up to ~$95,000 by being one of the first people to sign up for Binance to buy BNB and WTC. I also made a bunch off of hype coins like DRGN and various ICOs.

That $95,000 quickly became ~$50,000 after the crash and I ended up cashing out to pay my bills while I worked on a non-crypto related startup that I ran into the ground.

In August 2020 I put $1,000 into Bitmex and quickly lost $200 using margin. I started doing some research and decided to give up margin trading for good and transferred everything to Uniswap.

From there it’s honestly all a blur.

I started with following a bunch of people on Twitter who seemed to be doing well, then I went down the Telegram rabbit hole joining every channel I could from Gem Collectors (@crypto_thai) to Infinity Gainz (@CryptoExpert101) and countless others.

I came up with a strategy of only buying tokens that were under a day old and NEVER going to sleep holding something that had the potential of rugging. The majority of profits on new tokens are made in the first 3 hours, so I tried being one of the first 10 to buy something.

I did this by following Uniswap listing bots and paying attention to people spamming presales in Telegram channels. I was one of the first people into huge pumps (and dumps) like YFV, JGN, SUSHI, FARM, YFBETA, and a bunch of random farms.

I started in late August with 1.8 ETH and ended up finishing September with over 500 ETH. It was a crazy month with pretty much no sleep and a graph that barely dipped. My real world job performance definitely suffered. Luckily I run my own business so no one could fire me.

October was slow. I “only” made ~$60k after making ~$300k in September. November was “worse”. I actually lost ~100 ETH, but luckily in crypto even when you’re an idiot you still make money so I ended up with ~$40k in profit.

In December everything changed. I started aping 50-100 ETH at a time at anything that could potentially go up. Rebase and seigniorage started taking over so I just jumped into every clone of those and ended up with another almost $300k month.

So far in 2021 I’ve pretty much just sat in ETH and BTC and enjoyed the gains. I’m up a grand total of 1 ETH this month but still up $300k. I honestly don’t understand what’s happening at this point but that’s fine.

Along the way I’ve cashed out about $300k and have around $700k left. Taking profits has allowed me to take more risks. If I end up losing it all at least I’m guaranteed to end this adventure with $300k more in my bank account than I started with. Always. Take. Profit.

What would I suggest for people who want to be in the same situation as me? Pay attention to everything. Don’t stop learning. Find the right people to follow on Twitter, find the right channels to join on Telegram, research every coin that gets posted by the Uniswap listing bots.

You should also set up notifications for the wallets of influential people in the space. I’m not going to share all of the ones I follow, but the wallets of @AndreCronjeTech and @0x_b1 are a good place to start.

If you were notified of KP3R getting listed you could have been a millionaire in less than a day.

Etherscan is the most profitable product that has ever been released. Figure out how to interact directly with contracts that don’t have a UI. I’ve joined farms before they were released and had 100% of the rewards for up to an hour at a time.

Find like-minded people who will help you do research. You can’t do everything yourself. Finding new projects before anyone else is critical. If you have a team helping you find these projects you’ll be in a much better position than the majority who’ll end up buying your bags.

Don’t be afraid to be scammed. In total I’ve been rugged for over 100 ETH. It’s the cost of doing business. Scammers are always going to win in this space. Just try to learn their techniques and be a couple steps ahead of them. If they do something new then you adapt.

tl;dr: don’t sleep, ape into everything, get scammed, take profits.

Thanks for attending my TED Talk.”

How to Get a Loan to Buy Bitcoin (and other Cryptocurrencies)

How to Buy Your First Bitcoin (Step-By-Step Guide)

How to Buy Alt Coin (Crypto That is Not Bitcoin)

How to Buy Stellar (XLM) Lumens

How to Buy Cardano (ADA)

How to Buy TRON (TRX)

How to Buy Ripple (XRP)